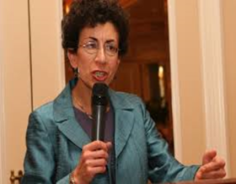 “The Collapse of the Berlin Wall; The Reunification of East & West Germany”

Janice G. Weiner was a career member of the U.S. Foreign Service for nearly 26 years.  She then worked for two years as professional issues and policy adviser for the American Foreign Service Association.  Her first Foreign Service assignment was to the then-U.S. Embassy to the GDR where, from April 1988-June 1990, she served as a political/economic officer during a momentous period in modern German history, spanning the period of the fall of the Berlin Wall and the GDR’s only free elections.

From 1990-1992, Ms. Weiner served as a political officer at the U.S. Embassy to Belgium. From 1993-1996, she was posted to the U.S. Embassy in Ankara, Turkey as embassy human rights officer, where she won AFSA’s Rivkin Award for her work.  Subsequently, Ms. Weiner was Officer-in-Charge of German Affairs in the State Department’s office of Austrian, German and Swiss affairs, where she also served as the office’s deputy. She also held posts in Warsaw and Toronto. She returned to Ankara from 2005-2008, where she worked as the U.S. Embassy’s Political Counselor.  She then served as press attaché at the U.S. Embassy in Mexico City, Mexico (2008-2009), prior to her final overseas tour as Consul General in Düsseldorf, Germany (2009-2012).  She returned to Washington to work as a Legislative Management Officer in the Bureau of Legislative Affairs until her retirement in September 2013.   She speaks German, French, Turkish, Polish, and conversational Spanish and Dutch.