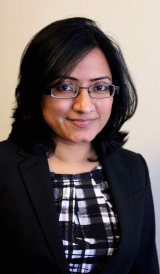 Thirty years after Methyl IsoCyanate (MIC) leaked from the Union Carbide (now a wholly-owned subsidiary of the Dow Chemical Company) pesticide plant in Bhopal, India, the disaster has claimed over 25,000 lives and over 150,000 people are chronically ill. Water and soil contamination from the abandoned factory have multiplied the impact of the disaster and have left women and children particularly vulnerable. The Bhopali survivors have waged a 30-year struggle for justice on a transnational scale, seeking adequate compensation, medical care, clean water and a comprehensive cleanup of the abandoned factory and its surroundings. Renu Pariyadath will discuss the disaster’s continuing health impacts in Bhopal today and the status of the transnational campaign produced in its wake.

Renu Pariyadath is a Ph.D. Candidate  in the Communication Studies Department at the University of Iowa with a minor in Gender, Women’s and Sexuality Studies. Renu researches migrant activism within the Indian diaspora and has been a volunteer with the international movement for justice surrounding the Bhopal gas disaster for over three years. She is interested in the barriers to and the possibilities for forging a transnational environmental and reproductive justice movement in the context of the Bhopal disaster. Renu is the Chapter and Volunteer Coordinator of the Association for India’s Development (AID-US) and former Community Outreach Coordinator for the International Campaign for Justice in Bhopal (ICJB). She got involved with the ICJB in 2012 when she visited Bhopal for her Ph.D. field research supported by the Stanley Graduate Award for International Research.