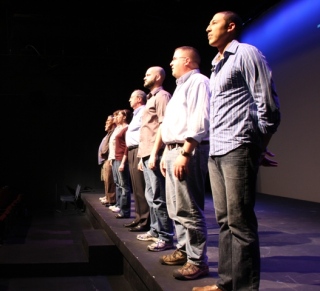 Telling: Iowa City was created from the stories of local veterans whose military experiences ranged over 40 years, from Vietnam to the current conflicts in Iraq and Afghanistan.  Unlike other shows, this play was performed by the veterans themselves, each telling their own stories of enlistment, deployment and return to civilian life.   Members of the cast will be talking about what it was like to be in the show and to share their very personal stories with the community. The show was co-produced by Working Group Theatre, the University of Iowa Veterans Association and The Telling Project. The Telling Project works with communities and organizations around the country to bring attention to the public ignorance of the immediate impact of war on individuals and communities, as well as the difficulties and danger that ignoring the rift between veterans and civilian populations poses to communities and the nation as a whole.The Cast of Telling: Iowa City includes: Joe Gasperetti (United States Amy 1966-1968), Charles Lynch (United States Army 1968-1971), Randy Miller (United States Navy 1973-1975), Theodore John (United States Marine Corps 1986-1992), Amanda Irish (United States Marine Corps 2002-2006), and Chris Deyo (United States Army 2006-2011). Jennifer Fawcett, the Associate Artistic Director of Working Group Theatre and co-writer and co-director of Telling: Iowa City, will be introducing the group. A native of Canada, she came to Iowa City to attend the University of Iowa’s MFA Playwriting Workshop. Fawcett is now preparing to write and direct Telling: Des Moines