“The Artist and the Haitian Art Relief Fund”

Haitian-born painter and sculptor Edouard Duval-Carrié gave a talk on “The Artists and the Haitian Relief Fund” where he discussed his own activities as a part of the Haitian relief effort, in addition to presenting a selection of his most recent artistic productions.

Duval-Carrié was born in Port-au-Prince, but his parents emigrated to Puerto Rico when he was still a child as a result of political insecurity in Haiti. He recieved his bachelor of arts from Loyola College in Montreal in 1978. As a graduate of the prestigious École nationale supérieure des Beaux-Arts in Paris, France (where he lived for eight years), Duval-Carrié’s art combines “African fables, classical mythology, Haitian and world history with contemporary events”. Duval-Carrié makes no pretenses about political neutrality, however. On the contrary, he considers his art to be a reflection of his own political conscious and a mirror of the rapidly changing world:

“I personally believe that most artists are in one way or another reflections of their immediate surroundings. What they are confronted with on a daily routine is bound to affect and influence their personal visions of the world. This general tendency would simplify my answers to inquiries on the relative importance of popular culture in the context of the contemporary art world. But with the advent of a rapid globalization and the proliferation of information at all levels, this permits everyone, and particularly artists, to take their ideas from a global well.” 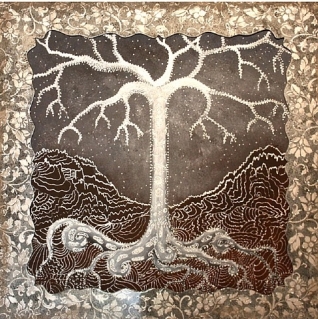 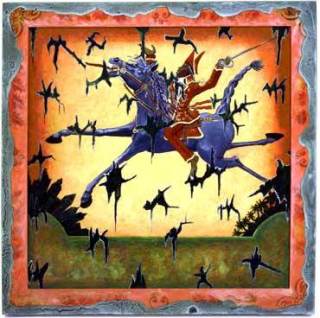